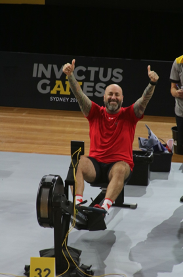 Derek Speirs has been awarded the Minister of Veterans Affairs Commendation from the Honourable Lawrence MacAulay, for his dedication to improving the well-being of Veterans. Derek embodies the principle that Canada has an obligation to honour and never forget all those who have served.

The Centre of Excellence congratulates Derek and sincerely thanks him for his tireless work to help his brothers and sisters – work that is far from over.

Derek always knew he wanted to be a submariner, ever since he first saw a submarine and thought it looked just like the Millennium Falcon from Star Wars. It didn’t matter that he never formally learned how to swim – his mind and heart were made up. He joined the Royal Canadian Navy in 1989 and completed his submariners training in 2002.

On Derek’s first voyage, he was involved in the 2004 HMCS Chicoutimi submarine fire and was stranded at sea for almost a week, every day not knowing whether he would survive. He experienced a PTSD-induced seizure following the incident, which resulted in six fractured vertebrae and being medically released from service.

“That was the end of my old life, and the beginning of my new life with chronic pain,” Derek said.

Derek was angry for a long time, but he learned how anger can make the pain worse.

Derek became involved in Veteran groups on social media, where he spoke with other Veterans who understood his pain and frustration, but they helped give him hope.

One of his Veteran brothers encouraged him to apply for the Invictus Games. One month later, Derek was chosen to represent Canada and his fellow Veterans, and (after taking a swimming class) he competed in the swimming race in Australia in 2018.

Derek has also become an advocate for Veterans issues and a leader with the Canadian arm of UN-NATO, an organization dedicated improve the quality of life of every Canadian Veteran by offering compassion, friendship, and respect.