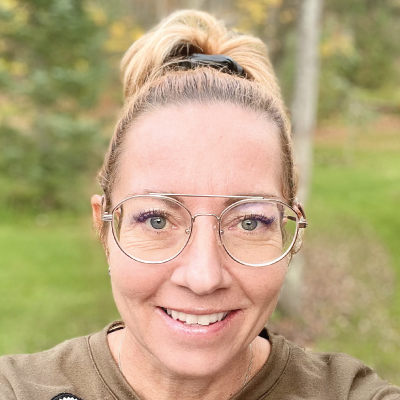 Retired Captain Hélène Le Scelleur enlisted in the Canadian Armed Forces in March 1990 when she was only 17 years old. She joined the first female cohort in the infantry trade at the Régiment de Maisonneuve in Montreal. Hélène's love for service to her country led her to join the Regular Forces in 1999 where she served a further 17 years, primarily as a healthcare administrator. During her long career, Hélène has had numerous assignments and deployments, notably in the former Yugoslavia on two occasions and in Afghanistan between 2007 and 2008.

Due to the recognition of her work in Afghanistan, Hélène received a commendation from the Commander of the Expeditionary Forces Command and was also chosen to become the Aide-de-Camp to the former Governor General of Canada, the very Honorable Michaëlle Jean. Sadly, Hélène's career came to an end in 2016 following a diagnosis of post-traumatic stress disorder linked to her last mission in Afghanistan. Deciding not to give up in the face of this irreversible decision, she pledged to pursue doctoral studies aimed at finding new solutions to deal with the identity crisis that follows the transition to civilian life of military personnel living with an operational stress injury.

Life in the Shadow of the Uniform: The Experience of Identity Transition Among Canadian Service Members Released Because of an Operational Stress Injury

The lack of knowledge about the identity crisis which seems to emerge among Veterans released because of an operational stress injury (OSI) has been identified in several research papers. Thus, we will try to answer the following question: What are the modalities of identity remodeling of service members released from the CAF following an OSI? We will study the experience of Canadian service members released for medical reasons – that is, those who received a mental health diagnosis incorporated in the spectrum of an OSI, as defined above – during their transition to civilian life, as well as the terms of the identity conversion process thus operated. We will review the service member’s career overall, namely, before, during, and after military life, in order to anchor our analysis in the servicemember’s subjective experience.

There are three objectives to this project:
1. To document the military institution rite and the techniques of building the military habitus upon entry, and during the institutional trajectory
2. To identify the objective and subjective factors that contribute, together, to the identity transformation of service members during their entire career (prior to, during and after service)
and
3. To understand the meaning given by the stakeholders upon their exit from military life, in relation with their daily practices and their concrete strategies for reintegration into civilian life

This research will contribute to a better understanding of the challenges surrounding the transition to civilian life for former service members living with an operational stress injury and of the impact of said transition on the members’ own identity. This research will also put forth the reality of chronic pain experienced by the participants, even if it appeared only as the interviews are held. This contribution is of great importance since it will identify the various roadblocks met during the transition towards civilian life, and will favour the progress of knowledge likely to improve the release and civilian life integration process. The Canadian Armed Forces, the Department of Veterans Affairs, the community resources, and the Veterans themselves will benefit from the new knowledge acquired through this research project.