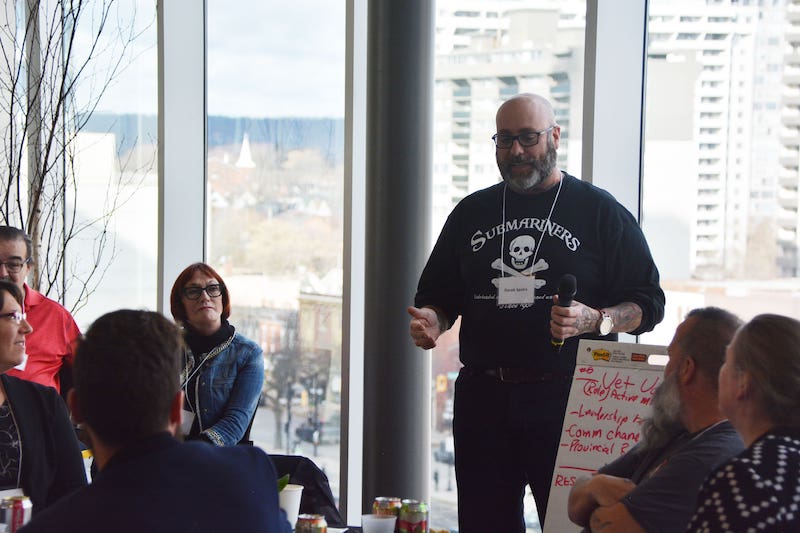 The Centre of Excellence is guided by the principle of Veteran Engagement, which means we partner directly with Veterans to genuinely understand the daily challenges they face with chronic pain.

Following the principle of Veteran engagement, the Centre of Excellence has established the Advisory Council of Veterans, wherein Veterans from across Canada provide advice to the Centre of Excellence on what we should research around chronic pain management. We had our inaugural Advisory Council meeting this past September 14 – 15 in Hamilton, where Veterans came together both in-person and virtually. At the meeting, Veterans collaborated with researchers to provide their input to help shape and prioritize our research. They also shared their personal experiences in dealing with chronic pain and what they found really worked for them.

Today, let’s meet two of the Veterans on the Centre of Excellence’s Advisory Council.

Bruno is a Veteran, Entrepreneur, North Pole Explorer, and Invictus Games Ambassador – among many other things. Bruno spent 15 years in active military service, including two tours in Afghanistan where he was part of an anti-explosives team, and was medically released from the CAF in 2014.

Once released from military service, Bruno felt like he had to start from ground zero and reframe what his new life in his new body would be. He asked himself, “what was I doing on a consistent basis when I was at my best?” The answer: staying physically active.

In 2014, Bruno participated in a challenging expedition with Veterans and civilians (including CEOs and industry leaders) to the North Pole with True Patriot Love Foundation, a Canadian charity that honours the sacrifices of CAF members, Veterans, and their families. During the expedition, Bruno and his fellow team members had to pull their own baggage – not just their food and supplies, but also their psychological “baggage” from military service. One Veteran on the expedition had lost the use of his legs, so the other Veterans took turns carrying him and his supplies. Bruno found himself coaching other team members – both Veterans and civilians – when they struggled, and encouraged them to keep going.

This expedition was an incredible healing experience because it gave Bruno the chance to push himself physically with a team he could trust and who supported him in turn. The expedition also showed him how valuable it was for his own healing journey to help others.

Bruno stayed physically active after the North Pole expedition and soon opened his own gym in Victoria, British Columbia. Bruno has been a physical trainer since he was 19 years old, and already has his accreditation and diploma, so it was a perfect fit. In his first year, he built his business with 60 clients. By his third year, he grew his client base to 180 clients.

“Veterans know what it’s like to be 100% fit because the military takes you there and even beyond that point,” Bruno says. “But once you’re medically released and are dealing with new limitations, we should reframe what fitness and well-being is to make it sustainable for you and your new body. Maybe you can’t go on a 5 km run anymore – but maybe you can go on a 1 km bike ride instead. What’s important is to find a physical and mental well-being program that works for Veterans over the long-term.”

Bruno is also the first Veteran mental health advocate with Bell Let’s Talk, where he talks with Veterans across Canada about mental well-being.

Bruno says that seeing someone who looks like him – a tall, muscular guy with tattoos and a beard – talk about mental health helps to remove the stigma around mental health that can inhibit Veterans’ pain management with chronic pain.

“Are we called human doings or human beings? Let’s just be. There’s nothing to fix about you. You’re just going through a hard time, which is normal. That’s all it is. That’s trauma.”

Dawn Herniman served almost 30 years in the CAF, retiring in 2018 as a Lieutenant Commander. Among her many qualifications, Dawn attended the Royal Roads Military College and Collège Militaire Royal de Saint-Jean, and then completed her Master of Arts in Psychology at Carleton University.

Since retiring from service, Dawn has become an expert on how yoga and meditation can promote mental and physical resilience in Veterans’ healing journeys.

But Dawn wasn’t always into yoga. Before she started practicing, Dawn – like many people – saw yoga as “stretching for hippies.” But after trying different types of yoga, she quickly embraced the practice because it helped her stay grounded and be present in her new body.

Like Bruno, Dawn understands that managing your chronic pain means Veterans need to relearn their new bodies, and “relearning” your body means you need to be kind to yourself.

“When you’re in the military, you’re in constant competition with yourself and everyone around you to be the best and push your body beyond when your mind is telling you to stop,” Dawn says. “Chronic pain and trauma in general operate in a similar way because it inhibits your mind and body from properly communicating. That’s why it’s so hard to explain your trauma with health professionals. So, when you have chronic pain, the first step is to listen to your body, because you’re no longer in competition with yourself.”

Listening to your body sometimes means learning what your new limitations are, learning what activities – be that yoga, going to the gym, and so on – work for you, and which activities don’t work with you anymore.

Practicing yoga helps Dawn be mindful and stay physically active without causing her pain. As Dawn says: “Motion is lotion. Our body needs to move. Just because we have new limitations with our new body, that doesn’t mean we stop exercising. In fact, having this new body means it’s that much more important to stay active in whatever way we can.”

Dawn is now a Yoga teacher with over 500 hours of training in yoga and meditation, with certifications and qualifications in Hatha, Chair, Ying, Warriors at Ease®, Integrated Positional Therapy, and iRest Yoga Nidra which is a trauma-sensitive healing yoga.

Because not all styles of yoga are appropriate for a given person, the Centre of Excellence is working with Dawn to record videos where she will teach some yoga techniques that have worked for her for other Veterans with chronic pain.

We will check back in with Dawn next month with some specific techniques about Yoga for Veterans. Dawn’s hope is that more Veterans can try out yoga and hopefully see its value, like she has.