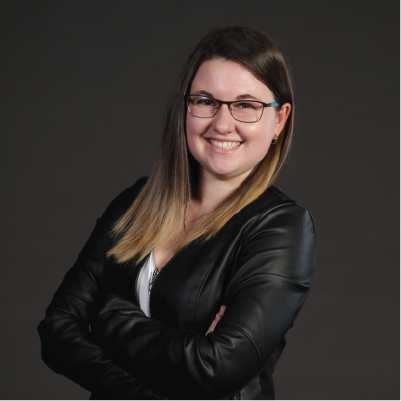 Shana Deschênes is a kinesiologist. She is currently completing her Masters in Clinical and Biomedical Sciences at Université du Québec in Chicoutimi. Her research is centered on the consequences of physical activity and of bio-psychosocial empowerment for veterans who suffered an operational stress injury. More specifically, she focuses on their impact on chronic pain, on cardiovascular illness risk factors, on quality of life, on sleep as well as on symptoms related to post-traumatic stress and depression.

Early in her academic and professional development, Shana became aware of the various health challenges faced by veterans. Since then, she has been working on the development of a specialized approach optimizing and managing the psychological and physical health of Veterans from everywhere in Quebec. She favours a multidisciplinary approach, with a goal of overseeing the various spheres of the Veterans’ daily life and offering them specialized adaptation strategies. Promoting healthy living habits is at the core of her philosophy and allows for better management of operational stress injuries. She is also the very first recipient of the François Dupéré Capacity Building Initiative of the Chronic Pain Center of Excellence for Canadian Veterans.

The Effect of Exercise on Body Composition and Somatic Symptoms of Veterans Suffering from an Operational Stress Injury: Pilot Project

Operational stress injuries (OSIs) affect over 23% of the Canadian Armed Forces’ Veterans. It was also reported that OSIs favour the development of a metabolic condition (obesity, dyslipidemias, hypertension, etc.) which contribute to the premature development of cardiovascular diseases and as a consequence, increase the risk of early mortality among Veterans. It is well known that regular physical activity attenuates the cardiovascular risk overall, and contributes to reduce the various somatic and comorbid symptoms (pain, anxiety, depression, etc.). In relation thereto, it was suggested that regularly engaging in physical activity would allow for the optimization of OSIs’ treatment. However, only a few published studies have specifically examined the impact of physical activity within the OSIs’ treatment plans among Veterans. In this context, optimizing the empowerment of psychosocial consequences, and also of physical somatic consequences of the OSIs among Veterans, is imperative.

This research aims at assessing the feasibility of a physical activity program combined with a psychological intervention when treating OSIs among Veterans. Its second objective is to assess the consequences of the program on the body composition of veterans suffering from an OSI. The third objective is to measure the consequences of this program on psychological well-being, the presence of comorbid symptoms (pain and severe depression),sleep quality, health perception, leisurely physical activities, and post-traumatic stress among veterans suffering from OSIs.

This research will assess the overall benefits of including physical activity in the conventional treatment plan of OSIs among Veterans. Thus, the research project might have a significant impact on the promotion of the benefits of a new resource to be exploited on a multidisciplinary basis.